Dr. Mikhail Balaev joined the WSU Department of Sociology as an assistant professor in August 2013 and is located at WSU Tri-Cities in Richland. Previously an assistant professor at the University of North Carolina Greensboro, he earned his PhD in sociology from the University of Oregon in 2008. He brings to WSU a strong background in global, political, and economic aspects of sociology and will strengthen our undergraduate and graduate instruction in these areas of expanding interest.

Dr. Balaev studies how economic phenomena influence social organization. This interest was the focus of his doctoral dissertation that analyzed how international trade was influencing political democracy in his native Russia and other former Soviet states (Balaev, 2014).

In a soon-to-be-published article in Sociological Perspectives, Balaev empirically identified time-delayed waves of the effect of economy on democracy for countries for which data were available from throughout the world.

For example, Figure 1 shows that the increase in democracy (reported as a mean score) occurred about two decades after a significant increase in the average Gross Domestic Product (GDP) per capita (calculated as a logged value and abbreviated as GDP in the Figure). 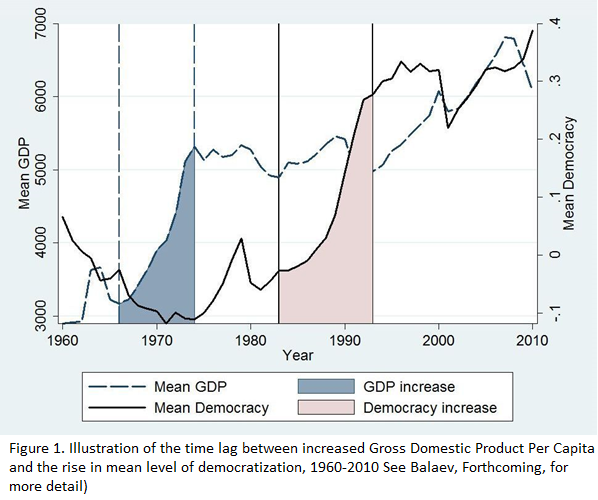 He also found that the strongest effects of economic development, as measured by the GDP per capita, occurred in waves that peak six, 20, and 40 years later. 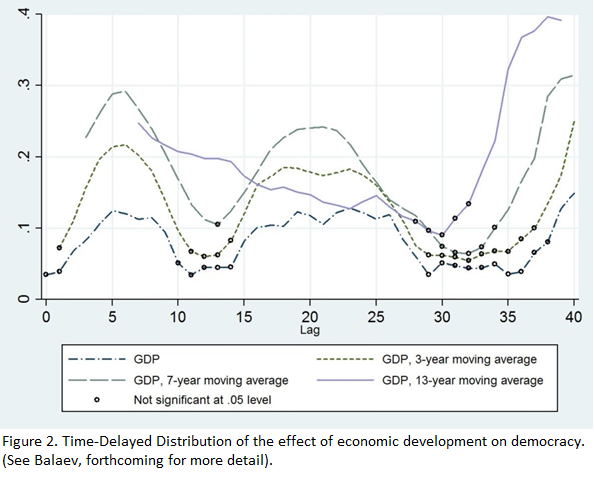 Dr. Balaev concludes that, for democracy at present, it matters how the economy was performing at a much earlier time. This finding is of particular sociological interest because this lag reflects the time required for movements, institutions, and perhaps social classes to develop.

Dr. Balaev uses longitudinal analysis (also known as panel analysis or cross-sectional time-series analysis) in his research to explore the time dynamics of the effects of economy, education, and gender equality on political democracy. He argues that if it takes years for such factors as social movements, institutions, and classes to form and begin changing the political spectrum in the country, we need to improve the existing theory that now ignores these time-delayed effects. A more dynamic theory is needed to better understand political democratization. He also suggests that current sociological theory in many substantive areas can be improved if we incorporate the methodological advancement of the last 20 years and the increasing amounts of longitudinal data. Dr. Balaev will be teaching a graduate seminar on Longitudinal Research Methods (SOC 522) in the fall 2014.

Another aspect of political organization being studied by Dr. Balaev is power elites in the United States. He recently received a grant for $166,000 from the National Science Foundation to begin a new, multi-year research project on the links between corporations and executive government. Presently, he is working on data collection with a doctoral student from political science and several undergraduate sociology students. Using previously unexplored documents, such as federal financial disclosures, Dr. Balaev is coding professional affiliations that include employment and board memberships, as well as education, sex, and wealth of the presidential appointees immediately before they occupied a government office, since 1978 to the present. Using this new longitudinal data set it will be possible to map the networks of the upper level of the executive government and examine the dynamics of change of the influence over time that corporations and industries exhibit on the executive government at the highest level.

Dr. Balaev’s long-term plans include writing a book on corporate influences in America that will contribute to the public debate on political campaigning and revolving door connections when corporate executives move in and out of political offices during their professional careers. He hopes that his future work will reach beyond academia, helping to advocate for a greater transparency and accountability in the political process.