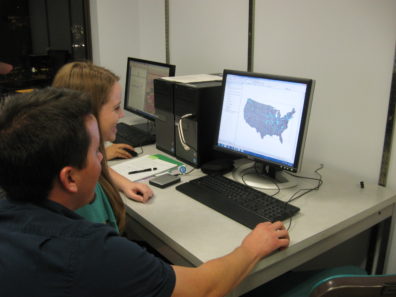 A growing amount of sociological research is integrating new methodologies to address classic theoretical questions about the role of spatial context (for example, the neighborhood or distance from socially-desirable goods) in shaping the life chances of peoples and places in society. Prof. Raoul Liévanos, WSU-Pullman’s newest sociology faculty member, is part of that trend. He uses geographic information systems (GIS) to measure the relationship between neighborhood context and socially-undesirable objects and events. He also integrates quantitative and qualitative approaches to understand the role social institutions, group dynamics, and contested meanings play in the production of social inequality across physical space. For example, his current research focuses on the contemporary and historical relationship between residential segregation and the unequal risk of exposure to food insecurity, air-toxic contamination, climate-related sea level rise, flooding, and home foreclosure in “risky neighborhoods” in Stockton, California and across the United States. To read more about his research, see: http://libarts.wsu.edu/soc/people/Lievanos/.

Prof. Liévanos came to WSU in August 2013, following completion of his PhD at the University of California-Davis.  He  has already taught his first graduate class on spatial analysis. In the class, students used a newly equipped GIS laboratory in Sociology that includes four high powered computers, a large format scanner for digitizing maps and areal imagery for analysis in GIS, plus a large format printer for poster-size presentation of results. This equipment allows him and other faculty and students to study social inequality with a novel spatial lens.

Researchers in the GIS lab can merge a diverse array of existing data sets collected for different purposes to explore, for example, how the distances that people live from schools, health facilities, fire and police stations, transportation nodes, environmental hazards, and other sites of potential interest differ depending on characteristics such as race, ethnicity, age, and financial status. In addition, the GIS laboratory makes it possible to study with much greater precision than was previously possible how urban patterns of living vary by city and change over time. Liévanos plans to use the GIS laboratory for a research-oriented service learning project on the spatial dimensions of poverty and homelessness in the Palouse region for his undergraduate Urbanization and Community Organization class in spring 2014.

Prof. Liévanos is a native of Santa Maria, CA, and earned his bachelor’s degree in sociology at Fresno State University.  After attending the University of California—Davis he developed strong interests in environmental inequality and the environmental justice movement. He was attracted to WSU’s sociology department because of its many years of engagement in environmental sociology issues and the work of current faculty with environmental interests, including Greg Hooks and Scott Frickel as well as former WSU graduate students Aaron McCright and Chad Smith. His long term goals include making novel syntheses between the sociology of risk, environmental and urban sociology and racial theory.  He also contributes to the methodological pluralism that has long characterized our department.

More about Dr. Liévanos’ work using GIS can be obtained from:

Information about resources for the use and implementation of GIS analyses is available from http://www.esri.com/what-is-gis  and directly from Dr. Liévanos, rs.lievanos@wsu.edu