We are indebted to Lew Carter’s daughter, Kim, for writing this remembrance of Lew’s life and for the photo of Lew and his hiking companion Koah, taken somewhere along the Snake River Breaks near Pullman.

Lew joined the WSU faculty five years after my arrival in Pullman, and I knew at the time I had a met a special person. He could trace the integral steps of a sociological argument as meticulously as he did for his PhD dissertation and express his analyses mathematically. He loved working with graduate students whom he taught to weave their way back and forth between deep sociological perspectives and ways to quantify their importance.

Lew also felt great satisfaction in connecting with the lives of real people, and thinking qualitatively about those lives, as he did in his book on the establishment and dismantlement of a commune established in eastern Oregon. His highly regarded book, Charisma and Control in Rajneeshpuram: A Community Without Shared Values, was a masterful accomplishment. The book detailed the progressive regimentation of the Rajneeshpuram commune and the escalating hostilities between it and the surrounding communities in Oregon that eventually led to its demise. In addition to being “a good read” for nearly everyone, it offered in-depth sociological insights into the importance of shared values for regulating group processes and negotiating relationships with other groups.

Later in his career, he connected with the culture of rural communities of eastern Washington, and the cultural values of Northwest Indian tribes. Lew was at home in the classroom, but was equally at home in the hills, mountains and valleys of the rural Northwest, where this photographs captured his enjoyment of the environment that he explored at every opportunity. 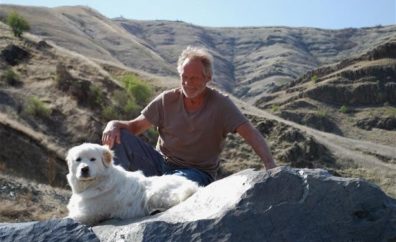 LEWIS F. CARTER, retired professor of sociology, director of graduate students in sociology, and associate dean of Arts and Sciences at Washington State University, died of respiratory failure in Pullman, Washington, early on January 1, 2019, at his home. Born on May 9, 1940, in Dallas, Texas, to Travis Ferrell Carter from Tyler, Texas, and Ruby Belcher Carter, he received his primary and secondary education in Dallas. He was the first member of his family to attend college. He adored living in the Pacific Northwest, especially backpacking in rugged conditions, although he did not look forward to winter. Sometimes he had a flare for the dramatic. On the same day that he passed away, New Year’s, a Chinook wind melted the snow in Pullman.

Lewis briefly attended Southern Methodist University and studied law, but he later transferred to the University of Texas. During his studies at the UT, Austin, he met his wife, Jeanne, a valedictorian and Speech Therapy/Special Education major, from Hearn, Texas. She and Lew married on January 6, 1963, in Dallas and were together for almost 56 years at the time of his passing.

In 1966, he received his PhD in Sociology from UTexas, Austin, with his dissertation An Exchange Analysis of Cross-Ethnic Mate Selection, where he refuted statistically the hypothesis of racial caste hypogamy. Lewis’s research refuted a common hypothesis that interethnic marriage happened when the non-white spouse belonged to a higher social class than the white spouse. Using statistical data, he proved that relationships were forged across ethnic groups, often between similar social classes because of the affinity that the couples felt for each other and things they had in common. In his later career, Lewis relied more on qualitative and ethnographic research methodologies.

In 1967, he began teaching at the University of North Carolina at Chapel Hill, where he continued his work on research methodology and statistics. Between 1971 and 1974, he followed Tad Blalock from Chapel Hill to the University of California, Riverside, where he served as chair of the Department of Sociology.

In 1974, Lewis was hired at Washington State University, where he taught statistics and methodology to undergraduates and graduate students. In the 1980s, he served the Department of Sociology as its graduate student director and actively recruited some of the best and most diverse students. Many of these students created new lines of sociological research in environmental sociology and applied sociology and founded graduate programs.

Lewis was known as a maverick with a mischievous sense of humor. He loved the Snake River Canyon. He often retreated there to grade students’ work and to canoe. Lew fought for the underdog, as a professor, ally, and friend.

During his time at WSU, he invited many graduate students to his family´s home for Thanksgiving and Christmas dinners. He considered many students from the Sociology Department to be friends, including Wei Yen, Ivan Weir, Michael Sullivan, Robert (Bobby) Emmet Jones, Candice Cleary, Abduhl Al-Zahrani, and others. Some can be traced through a list of his publications where he appears as second author, others were remembered fondly by Lewis for their shared experiences.

During the 1980s, he participated in several collaborative research projects on the environment at Hanford, Washington, and in Juneau, Alaska. He then organized a participant observation field research trip for graduate students on Rajneeshpuram. On the advice of his neighbors and friends, Louis and Margaret McNew, and colleague William (Bill) Willard, Lew moved to a farmhouse outside of Uniontown, Washington, for a sabbatical year to finish the manuscript of Charisma and Control in Rajneeshpuram: The Role of Shared Values in the Creation of Community (American Sociological Association, Rose Monograph Series), based on this research.

In the 1990s, he served as associate dean for the College of Arts and Sciences and continued to teach, working closely with Dr. John Pierce. During this time, he traveled as a visiting professor to the Ukraine, Canada, and Saudi Arabia.

In 1995, Lew was a visiting professor to Nicola Valley Institute of Technology in Merritt, B.C., where he was invited to several events associated with Lakota culture. It was an experience that would influence him for the rest of his life, perhaps in part because his family’s oral history included stories of Choctaw ancestry. He participated in the Sundance and Vision Quest for personal reasons, completing this charge when he was just over 60 years old—the same year that he retired from WSU.

When his children were young, he took them and Jeanne on several backpacking trips to the Olympic Peninsula, Northern Idaho, New Mexico, Colorado, and Montana. Later, he showed his love of the wilderness and the land to his grandson, Marcos, visiting the Snake River, Moose Creek, and the Clearwater River.

He continued to visit Wawawai, Granite Point, and other parts of Snake River canyon with his dogs Greta and Koah.  Lewis was preceded in death by his sister Pat and his parents, Ruby and Travis. He is survived by his wife, Jeanne Carter, his son, Erik Carter, his daughter-in-law, Miwa Kihara, his daughter, Kim Carter Muñoz, his grandson, Marcos Luis Muñoz Carter, and his cousins, Bob Barron and Peggy Walker.