In light of some monumental changes in gender roles in recent decades, especially the growth in women’s labor force participation and representation in management and professions, one might expect near parity between the sexes in corporate crime. Yet scholarship on gender, crime, work, and organizations suggests that traditional gendered roles and opportunities continue to restrict women’s involvement in white-collar crime.

For  “Gender and Twenty-First Century Corporate Crime: Female Involvement and the Gender Gap in Enron-Era Corporate Frauds” (American Sociological Review 78(3) 448-476), Jennifer Schwartz, and her two colleagues, Darrell J. Steffensmeier and Michael Roche, combed through indictments and other reliable sources of information on conspiracy groups responsible for 83 major corporate frauds involving over 400 defendants. They  found that women were rarely involved in these schemes. When females were involved, they most often played minor roles, occupied low-level corporate positions, and profited less than their male co-conspirators. Women often became involved because of close personal relationships with male ringleaders, or because they occupied a financial corporate position integral to the crime. Although women have made monumental gains in terms of labor force participation and representation in management and professions in recent decades, they have not entered the ranks of upper-level white-collar crime. Rather, it is “business as usual” when it comes to who commits major corporate frauds.

This corporate fraud project reflects Dr. Schwartz’s larger interest in how social changes and women’s position in society are related to girls’ and women’s criminal offending and social control responses to it. She also studies changes in female and male violence and substance use. Despite the perception that girls and women are becoming more violent or drinking and drunk driving more often, her research finds no such changes over the past several decades. Rather, broader legal policies aiming to arrest more minor offenders have increased the rate at which women are being arrested, especially in comparison to men. The findings across all different sorts of crimes seem to demonstrate that, despite significant changes in the lives of women, the extent and character of female offending haven’t changed all that much. 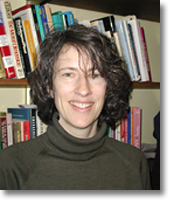 Bridewealth is fundamental to marriage in Africa. It involves families negotiating a bridewealth payment that may include goods such as livestock, clothing, household goods, and other items. The man’s family pays the negotiated amount to the woman’s family. Yet scholars and policymakers know little about its consequences for women in contemporary Africa.

In, “The Shadow of Indebtedness: Bridewealth and Norms Constraining Female Reproductive Automony” (American Sociological Review 78(3) 503-520), Christine Horne and her colleagues, F. Nii-Amoo Dodoo and Naa Dodua Dodoo, use a unique vignette experiment with rural women in the Volta Region of Ghana to test the argument that the payment of bridewealth strengthens normative constraints on women’s autonomy in the reproductive domain. When bridewealth has been paid a woman’s control over her reproduction declines. Their results suggest that the practice of bridewealth institutionalizes patterns of obligation that require women to defer to their male partners in the reproductive domain. Their results suggest that efforts to improve the lives of African women must take into account existing marriage practices and related gender norms. Policies that fail to factor in the normative obligations created by bridewealth payments may have limited success.