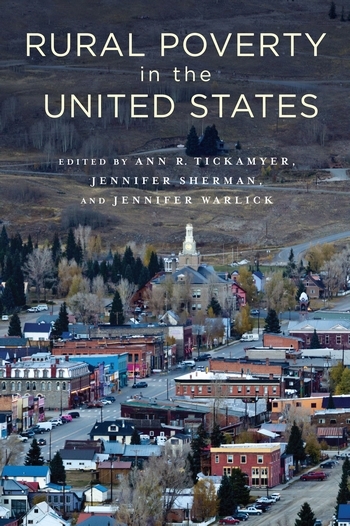 conditions in cities and urban contexts, without considering the dimensions of poverty that occur in rural areas. Associate Professor Jennifer Sherman is co-editor of a new book titled Rural Poverty in the United States that challenges the trend.

Rural Poverty in the United States is the first edited volume on the topic to be published in 25 years. Dr. Sherman, Ann Tickamyer at Pennsylvania State University, and Jennifer Warwick at Notre Dame were approached by Columbia University Press to complete this volume.

“Our goal was to provide an up-to-date, comprehensive understanding of rural poverty in the U.S. that crossed multiple topics and disciplines, and which was digestible by advanced undergraduates,” Sherman said. “We attempted to recruit authors from multiple disciplines, including sociology, public policy, economics, law, and education—although there is still a major focus on those with backgrounds in rural sociology.”

The book includes chapters that discuss a number of social problems—such as joblessness, housing unaffordability, and drug addiction—which are usually studied in an urban context.

“I think there has been a growing interest [in rural areas] to a large degree because the presidential election and its aftermath have awoken many urban Americans to the growing rural/urban divide in our nation—both in terms of economic fortunes and cultural/political understanding,” Sherman said.

“My hope is that the timing of the volume means that it’s well placed to help those who are now thinking more about these concerns to craft informed solutions.”

In addition to co-editing the volume, Sherman also contributed a chapter about rural poverty and social capital that drew upon her qualitative fieldwork in Washington state and California. She analyzes the kinds of resources—beyond income or money—that people in rural communities draw upon to survive.

For example, residents of rural Paradise Valley, Washington (a pseudonym used to protect the identity of participants), discuss how they use familial and community connections to address problems related to housing and childcare. Her chapter also notes that these informal forms of social capital are not universally available. Some newer residents of Paradise Valley report feeling socially excluded from the community.

This work shows that social capital can be both a resource and a division to residents of rural communities struggling with poverty.