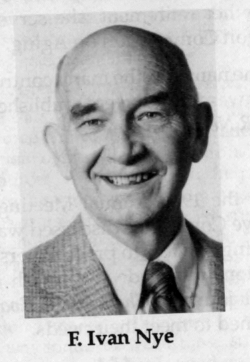 Dr. Ivan Nye, who for many years was a member of the departments of Sociology and Rural Sociology at WSU, died March 1, 2014, at the age of 96. The obituary at the end of this piece was written by former faculty member Dr. Viktor Gecas, who was featured in the Fall 2013 issue of Sociology E-News.

Ivan was the Department of Rural Sociology chair who welcomed me to WSU in 1969 and contributed greatly to the start of my career. As the newest faculty member, I soon learned that a half-hour coffee session each morning at 8:30 was more an expectation than a possibility. Ivan, Walter Slocum, and sometimes others, would stop by my small office, and we would walk across the street to the Compton Union Building (CUB).

Those coffee conversations were always pleasant and mostly about fishing (a passion shared by both Ivan and Walt) and how to experience the outdoors of the Pacific Northwest, neither of which was part of this assistant professor’s Midwestern upbringing. Frequently, with map in hand, Ivan would talk in detail about the nearby places he went on weekends, most of which, as we younger faculty learned, were at least 150 miles away and often demanded arduous hiking.

During that first year in Pullman, I was trying to figure out how to conduct postal surveys in order to have data for analysis. Ivan wanted to help! In particular he wanted to talk about social exchange as the likely reasons that people would or would not respond. These theoretical conversations continued for a few years with Ivan constantly bringing in new specifics for how he thought that this theory (which was also his preferred theory for explaining family relations) would work. In addition he often loaned me books to back up his thoughts. Eight years later, when I published the first edition of Mail and Telephone Surveys, The Total Design Method, I had become an advocate of social exchange for explaining why people did or did not respond to survey requests. As a result of Ivan’s persistent instruction, I became and remain an advocate of social exchange as the most useful theoretical framework I have found for identifying survey design features of surveys that might be shaped in ways that will improve response and data quality.

However, Ivan’s seriousness about exchange theory was minor compared to his commitment to being fit and traversing the backwoods of the Inland Pacific Northwest. Occasionally, I would see Ivan riding his one-speed bicycle up Stadium Way, one of Pullman’s long steep hills. However, not once did I see him dismount before getting to the top. Physical fitness wasn’t a routine exercise for him, it was simply his life. Those early years as a lumberjack came to mind as an explanation for his powerful legs and physical determination.

One morning at coffee Ivan explained why he liked to visit the Jasper Park area in Alberta for hiking and fishing. He mentioned, in his slow methodical way, that the only problem with it was that you might run into grizzly bears. We asked how he dealt with that problem. Ivan explained that some people liked to wear bells to warn the grizzlies away, but he did not. He preferred to carry a fishing pole that was thin with a flexible tip. I felt compelled to ask why. His response came with no change in his slow methodical voice or expression: “Well grizzlies have really tender noses, so the idea is to hit the bear across the end of the nose with the end of the fishing pole to make it run away.” I don’t think he convinced any of us that would be a good thing to do, but if anyone might test that theory, Ivan was probably the one. I found much greater comfort in his ideas about social exchange for explaining human behavior that for fending off grizzlies in the wilds.

Ivan helped many of us start our careers in sociology at WSU, as well as introducing us to the Pacific Northwest, and we appreciated that. Morning coffee was not the same after Ivan left Pullman.

Ivan Nye was born in Prospect, Oregon, in 1918. At that time, Prospect was a village of about 100 people. It’s not much bigger now. It is located in southwest Oregon in the heart of the Cascade Mountains, surrounded by pristine wilderness with its beautiful lakes, mountain streams, and forests. Growing up in this beautiful place shaped Ivan’s character—his rugged individualism, sense of adventure, and love of nature. It is a wonder that he ever became a sociology professor. But that came later. In his youth he was a lumberjack, and a damn good one according to his family. Then came World War II, and Ivan served as a pilot in the U.S. Air Force. Perhaps it was this experience that broadened his horizons beyond Prospect Oregon, although his heart never left nature’s wild places.

Ivan’s specialty was family sociology. During the 1960s and ’70s he was one of the most prominent and influential family sociologists. He was elected president of the National Council on Family Relation (1965-66). He was the recipient of the Burgess Award from the NCFR (1976), given for a career of “distinguished contributions to family research and theory.” He served on the Governor’s Commission on the Status of Women (1965-1969). He was editor of the Journal of Marriage and the Family (1960-64), and served on the editorial boards of many other scholarly journals. During these decades, Ivan also built a first-rate graduate program in family sociology at WSU.

Early in his research and writings Ivan focused on family relations and juvenile delinquency. In a series of articles and a book (Family Relations and Delinquent Behavior, 1958), he analyzed how family structural and interactional variables, combined with social class and other macro variables, affect juvenile delinquency. While this was an important and fruitful line of research, Nye’s major contribution to family sociology was the study of family roles and the impact of women’s employment and other social trends. Ivan was one of the pioneers in the study of the consequences of wives/mothers’ employment for spousal and parental roles in American families (Nye, et al, The Employed Mother in America, 1963;  Lois Hoffman and Ivan Nye, Working Mothers, 1974; Nye, Role Structure and Analysis of the Family, 1976). Now this is one of the most-studied topics in family sociology.

Ivan made substantial contributions to family theory development as well. His book with Felix Berardo, Emerging Conceptual Frameworks in Family Analysis (1966), sparked considerable interest in the identification, expansion, and utilization of theoretical perspectives in family studies. This culminated a dozen years later in a major effort at family theory building, sponsored by the Theory Workshop of NCFR, in two edited volumes: Burr, Hill, Nye, and Reiss (Eds.), Contemporary Theories About the Family, Vol. 1 and 2. The Free Press, 1979. These books became essential reading in family sociology graduate programs for decades. Ivan’s own theoretical preference was social exchange theory, which he considered particularly useful for understanding and explaining family relations (“Choice, Exchange, and the Family”, in Burr et al, 1979; “Is Choice and Exchange Theory the Key?” Journal of Marriage and the Family, 1978). He was a strong advocate of this theory.

Ivan had strong applied interests as well. He believed that sociological knowledge should be used to improve society and the quality of people’s lives. The last two years of his professional life he spent as a Visiting Scholar at the Boys Town Center for the Study of Youth Development (1979-81), developing programs for helping troubled youth.

Ivan Nye lived a long, productive, and adventurous life. He was fiercely independent, loved the wilderness, and was an avid fisherman. He would drive to Alaska (in his van, pulling a small boat) to fish for salmon, and crisscross the United States to fish and hike in various wilderness places.  Even after suffering a debilitating stroke 12 years ago, that left him partially paralyzed, he struggled to maintain his independence and adventurous lifestyle until, eventually, he no longer could. He spent the last few years living with his son Lloyd and daughter-in-law Cynthia in Julietta, Idaho, where he died peacefully on March 1, 2014. His ashes will be buried in Prospect, Oregon, as he wished. I will miss him.