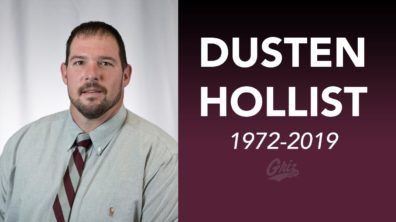 Word spread quickly in early February, on both sides of the Bitterroot Mountain Range separating Missoula and Pullman, that Dusten Hollist (PhD, 2003), was ill with cancer. Less than two weeks later, on February 10, 2019, he passed away.

Dusten came to Pullman in 1999 after graduating with both bachelor’s and master’s degrees from the University of Montana, and returned there as a faculty member after completing his WSU doctoral studies. His enthusiasm for sociology, athletics, and life in general were contagious. In addition to serving as chair of the UM Department of Sociology until his death, he was serving as NCAA Faculty Athletics Representative at UM.

In Pullman, we remember him as a person whom both faculty and students wanted to spend time with, experiencing his infectious sense of humor and practical manner for setting goals and getting things done.

The Missoulian published this brief obituary on Dustin’s life, February 12, 2019:

“MISSOULA — Some of the light in the world dimmed on the cold morning of Feb. 10, 2019, when Dusten Ray Hollist, 46, of Missoula, died after a brief battle with cancer.

Dusten was born May 6, 1972, in Rexburg, Idaho, to Robyn Oakden and Terry Hollist. Things weren’t always easy growing up and Dusten showed an early aptitude for troublemaking, but he grew to be an honest kid and a good athlete.

As a young man, Dusten was called to represent his faith on a LDS mission to Ecuador. Upon returning, he went to Ricks College in Rexburg. There he met Cheri M. Gardner, who he loved with a passion unbridled until his dying day and onward for eternity. After a short courtship filled with footsie and hickies, Dusten and Cheri were married on May 13, 1994. They started a family quickly, bringing into the world a daughter, Mariah Jo Hollist, on Feb. 24, 1995, and a son, Tristen Ray Hollist, on June 20, 1996.

Dusten was the kind of dad and husband other men held as an example. He was patient, gentle, and didn’t miss a game or meet. He knew when to joke and when to call his kids a “knucklehead.” He made his family and those around him strong and would be proud to be judged by his works.

Like a great bear, Dusten was always fiercely protective of his family and friends. In stories without number, Dusten would urge someone to stand up for themselves, but if they were unsure, he would lend his strength and fight for what was right.

This sense of justice and honor has steered Dusten his whole life. Initially interested in law enforcement, getting an AA from Ricks, he went one step further into the “why” and pursued a career in criminology. He graduated from University of Montana in 1997 with a BA in Sociology and in 1999 with a MA in Sociology, both with an option in criminology. In 2003, Dusten earned a PhD in Sociology, with an emphasis in criminology, from Washington State University.

Dusten was asked to join the faculty of the University of Montana and rose to become the chair of the Sociology Department. He was a beloved teacher, a gifted researcher and the author of many published articles and a book on juvenile justice. He was able to combine analysis with a sincere and non-judgmental desire to help people in order to make the state of Montana and the world a better place to be.

In addition to his professional and personal achievements, Dusten took great pride in his role as the Faculty Athletics Representative for the University of Montana. He was a savage fan of Griz athletics and worked very hard to bring talent to the school, helping to mold both the programs and the lives of young athletes. However, Dusten went one step further, he continued his support to a personal level and tried to make every game, match and track meet he could, even traveling to do so.

Rooms lit up when Dusten entered them. He had an infectious smile and a voice so kind it brought reassurance to the person he was speaking to.

Dusten was an avid outdoorsman and there were few things he loved more than fishing, hiking or spending a warm summer night driving his 1966 cayenne pepper red Plymouth Satellite convertible under the Bitterroot Mountains.

He will also leave a hole in the hearts of numerous in-laws, out-laws, nieces, nephews, cousins, friends, colleagues, and those strangers he hadn’t gotten around to making friends with.